The African holly has attractive bark and berries. It grows throughout the country, making it suitable for colder, frosty gardens too. 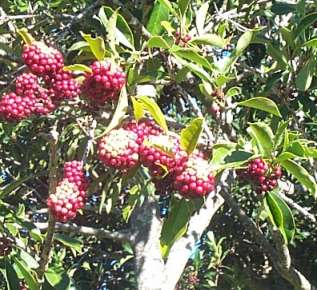 Ilex mitis is an evergreen tree, between 10 and 25 m tall, with a straight trunk and a rounded canopy. Stems are normally round. Bark on the young tree is a pale grey-brown with patches of white, smooth with fine, transverse ridges and yellow-brown corky specks. As the tree becomeslder it becomes evenly whitish-grey with dark rough spots. 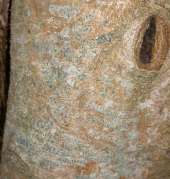 Young twigs are a reddish purple colour. The simple lance-shaped alternate leaves are a shiny dark green and are carried on plum-coloured stalks. They are between 70-100 x 19-25 mm, with pointed, sometimes curled tips and wavy, sometimes slightly toothed margins. The plum-coloured leaf stalks help to identify the tree. The midrib is sharply impressed above and prominent below. 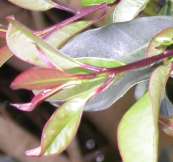 The small flowers are borne in spring or early summer in bunches between the leaf axils. They are white and sweetly scented. Male and female flowers are borne on separate trees. The forest floor below the trees become carpeted with tiny, white flower petals that are shed as the fruit begins to develop.

Fruits ripen on the female trees in autumn, turning bright red, and as these are densely packed along the stems, they provide bright splashes of colour, attracting many kinds of birds. There are several seeds in each fruit which is small and round with a sharp point. Fruiting trees are conspicuous when viewed from above.

The wood is whitish to grey-green, is close-grained, medium-hard and medium-heavy and is easily worked.

There are three genera and over 500 species in the holly family, most growing in Asia and tropical America. More than 200 evergreen tree and shrub species belong to the Ilex genus and occur mainly in temperate and subtropical forests. There is only one species in South Africa, Ilex mitis. It is very widely distributed in Africa, growing on the banks of rivers and streams and moist spots in woods and forests.It grows in all the provinces of South Africa, and also in Swaziland and Lesotho.

Ilex is the Latin name for the Holm oak, and mitis means unarmed, alluding to the leaves which are not prominently toothed, unlike some other species in the genus which have sharply spiny leaves, such as the traditional holly, Ilex aquifolium, used in Europe and North America for Christmas decorations.

A tree of woods and forests, from sea level to high mountains, often found overhanging streams along which it grows. It is variable in size depending on where it is growing. In the forests of Knysna it easily reaches a height of 18 m and may have a trunk diameter of 0.6 m. Brilliant red fruits in autumn attract birds. In the Knysna forests elephants show a particular liking for the leaves.

When the leaves are rubbed together they give a lather and this was once used by the Knysna woodcutters to wash themselves in the streams of the forest. The Zulus are also aware of this use, reflected in the name iPhuphuma  meaning ‘it foams out’. The Venda name when translated means ‘milk-pail washer’.

The wood was once used in the construction of wagons for buckboards and occasionally for spokes. It was also in demand for the heels of ladies shoes. It is still used for implement handles and furniture as well as fuel.

Fresh seed grows easily. Seed collected from the tree, or those fallen below the tree should be allowed to dry. Trees can be very tall, making collecting off the tree very difficult. They should then be sown into a tray containing a 1:1 mixture of river sand and compost. Seedling mix obtained from nursery centres is also suitable. Seed should be covered lightly with the soil mix and then kept damp. Although germination can be erratic, seeds usually begin to germinate 8-20 days after sowing. The seedlings need to be transplanted into a mix of sand and compost in bags at the two-leaf stage.

It is a fairly fast-growing tree, 0.8 m a year being possible. It transplants well, but needs protection whilst young. It grows best when planted alongside a running stream. It is one of the few indigenous evergreen trees that can cope with frost, making it especially suitable for cold areas. To be sure of fruit, plant a small grove of these trees and remove extra males later.

Pests and diseases: None known. 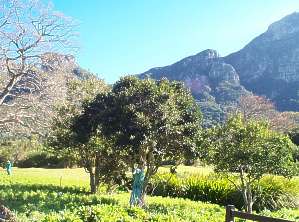