Ptaeroxylon (pronounced ‘teroxillon‘) is a direct Greek translation meaning sneeze and wood; obliquum refers to the oblique leaflets. Umtata in the Eastern Cape takes its name indirectly from the Xhosa name for this tree. This is a protected tree in South Africa. 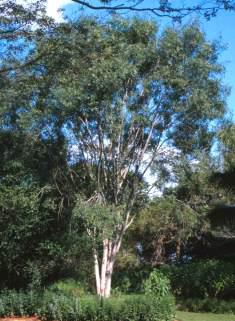 Sneezewood plants are easily identified by opposite leaves, with three to eight pairs of dark green leaflets, including a terminal pair at the tip. Leaflets are distinctly asymmetrical in shape. Foliage sometimes colours in autumn and winter, but the tree is not always decidouous.

The young foliage is browsed and enjoyed by game including various antelope and giraffe. 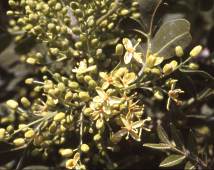 Flowers are small, sweetly scented, with four petals, opening white with an orange centre from creamy yellow buds, and are produced from August to December. Male and female flowers occur on different trees. The fruit is an oblong capsule, notched at the tip and splits open to produce winged seeds. 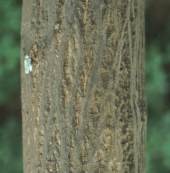 Young stems are smooth with pale, blotched bark which becomes fissured with age. Estimates of maximum height vary from 20 m to 35 m, but trees in montane forests usually attain 10 m and those in bushveld and drier regions remain as small trees or shrubs growing to around 3 metres.

The distribution of this species extends from the Eastern Cape, where it was once common, to Tanzania in tropical Africa. It occurs in woodland,scrub forest and evergreen montane forest. 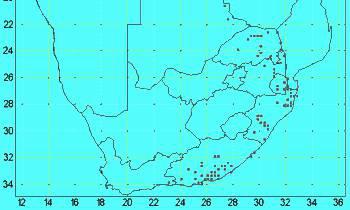 Until recently this and the Madagascan Cedrelopsis were placed in a family of their own, Ptaeroxylaceae, but DNA sequences and chemical evidence leave little doubt that they belong to the large citrus family Rutaceae.  Other indigenous trees in the family recommended for the garden are the Cape chestnut (Calodendron capense), white ironwood (Vepris lanceolata)and the small knobwood (Zanthoxylum capense).

The Common Citrus Swallowtail butterfly Papilio demodocus is known to visit and breed on this tree, as it does on other members of the family Rutaceae.

Sneezewood is extremely hard and durable and highly valued as a timber for fence posts and buildings  In the past, it was also used extensively for railway sleepers. Little furniture was ever made of it, but with some effort and preparation beautiful pieces can be made and these are prized today. Highly irritant, aromatic peppery oils, containing nieshoutol are produced by the wood, causing violent sneezing by woodworkers after sawing or sanding. When used as machine bearings sneezewood often wears longer than brass or iron. In Mozambique it is the preferred wood for the manufacture of xylophone keys.

The tree is used traditionally both for medicine and ritual purposes. Bark is used as a snuff to relieve headaches. Pieces of wood can be placed in cupboards to repel moths. The resin from the heated wood has been applied to warts and powdered bark added to a wash to kill cattle ticks.

The wood is reported to “burn like paraffin”- giving a bright, hot fire. It was also used as tinder to make fire by friction. Great quantities were felled for fuel and other uses in the past, making it scarce today. Palmer & Pitman (1973) in Trees of Southern Africa report that sneezewood was used to fuel five lime kilns at Bathurt and for the steamtugs at the Kowie (Port Alfred).

Seed, if not damaged by insects, is easy to germinate. Collect seed justbefore the capsules split, if possible, and sow in a 1:1 mixture of river sand and compost. Cover with thin layer of sand. Transplant seedlings when they reach the 3 leaf stage. Trees planted in the open soil will need good watering to become established.

This is a moderate to fast grower (0.4 to 1 m per year). It will withstand moderate frost and is very drought-tolerant, but will perform better where rainfall is higher. It appears to prefer shale or limey soils, but grows in most well-drained sandy or rocky soils.