The Natal lily, Crinum moorei, with its large, white to pinkish red, open tubular flowers, literally glows in the dappled shade of the century-old plane tree avenue in the KwaZulu-Natal National Botanical Gardens in Pietermaritzburg during midsummer (October to January). 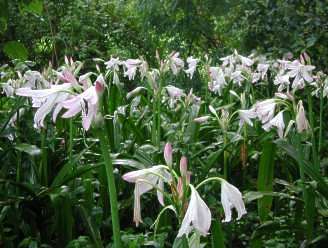 It is one of the larger members of the world-wide tropical to temperate ornamental lily family, Amaryllidaceae. The family includes the European narcissi and daffodils but also gardeners’ favourites from southern Africa such as Amaryllis, Haemanthus, Scadoxus, Clivia, Brunsvigia, Boophone and Cyrtanthus (see the plant index or search for pages about these plants).

The large bulb (up to 200 mm in diameter) of Crinum moorei rests just under the surface of the soil but has a an elongate neck which protrudes a further 200-300 mm above ground. The long, flat, dark green leaves (up to 1 m long and about 200 mm wide), emerge in a rosette from the neck which also produces a long flowering stalk in summer of 1.2 m or more, topped by 5-10 large, open, white to pale pink flowers. 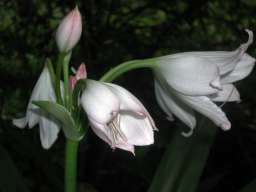 Inez Verdoorn (1961) said that in both Eastern Cape and KwaZulu-Natal the bulbs vary considerably in size and also in the colouring of the flowers, which range from white to white suffused with pink. The light pink flowers illustrating her account in The Flowering Plants of Africa came from Port St Johns.

According to the Red List of South African Plants, Crinum moorei is Vulnerable (VU). Its wild population is decreasing, and has declined by at least 20% over the past 70 years. This decline is caused by harvesting of the bulbs for the traditional medicine plant trade, and due to infestations of the Amaryllis Borer (Brithys crini). Crinum moorei is the least common of all the Crinum species and is not often seen in the wild.

Crinum moorei is found in the South African eastern seaboard coastal forest from the northern Eastern Cape (Port St Johns area) in the south to northern KwaZulu-Natal (Mtunzini District). It grows well in light shade at higher altitudes if protected from frost.

Crinum moorei was described by 19th century botanist, Sir Joseph Dalton Hooker, while he was director of the Royal Botanical Gardens at Kew in London. According to Verdoorn (1961) his description was based on plants grown by Dr D. Moore, after whom he named it. Dr Moore, director of the Glasnevin Botanical Gardens in Dublin, received the seed from a British soldier named Webb who collected it in KwaZulu-Natal during the 1860s. The genus name Crinum is derived from the Greek krinon, meaning ‘lily’.

Crinum moorei is found in large colonies in damp, marshy areas in the shade. Bulbs collected from Port St Johns by Dr L.E. Codd (Verdoorn 1961) were found on the margin of a patch of coastal forest in heavy black soil near water. Flower scent appears stronger in the evenings (Nichols 2002), suggesting an evening moth pollinator.

Pooley (1998) records that C. moorei is used in traditional medicine for urinary tract infections and to treat cattle. Nichols (2002) notes that the bulbs are also used by traditional healers to cleanse the blood, treat infected sores and even acne. 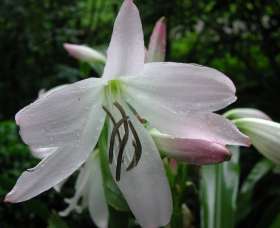 Geoff Nichols (2002) warns that these are forest lilies and must be grown in dappled shade as full sun will burn the leaves yellow. The plants should be in light broken shade when leaf production starts at the end of winter.

At the Botanical Gardens in Pietermaritzburg we have found that full sun not only damages the leaves but also burns the flowers. We grow them successfully in semi-shade in areas such as on the sides of our century-old plane tree avenue where they grow happily with Plectranthus shrubs and the lower-growing hens-and-chickens, Chlorophytum comosum.

Our plants are grown both from bulbs and from the peanut-sized seed. Seed should be sown fresh either where they are to grow or in trays immediately after harvesting, as the seed does not keep well. Bulbs sown from seed will take three to four growing seasons before flowering. Older bulbs being planted out should be well spaced to prevent overcrowding, as they continue to produce new bulbs. The bulbs are dormant in winter, the leaves dying off after flowering.

The bulb needs good natural compost or fertilizer, and it needs to be well watered in spring and summer.

In the coastal KwaZulu-Natal garden the plants, particularly the leaves, are susceptible to damage by the introduced Amaryllis moth caterpillar (Brithys crini). Regular spraying with a pyrethrum-based insecticide controls this problem. The herbivorous mole rat also damages the bulbs.