A handsome tree with a wide-spreading, rounded crown, and bright red, nectar-filled flowers in spring and early summer that attract many birds and insects; it is easy to grow and makes a good shade tree or specimen tree. 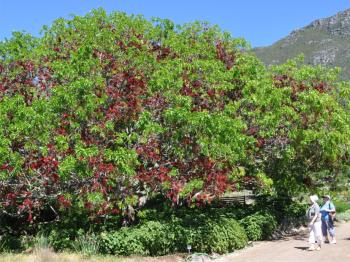 Schotia brachypetala is a handsome, medium to large tree with a wide-spreading, densely branched, rounded crown. It has a single trunk that sometimes branches low down. The flowers are rich deep red, and are produced in masses, in dense branched heads on the old wood during spring (Aug.-Nov.). The flowering time is somewhat irregular in that a tree in bloom may be a few metres away from one that has no sign of flowers. This irregularity is of value to the nectar feeding birds, and ensures a longer feeding season. 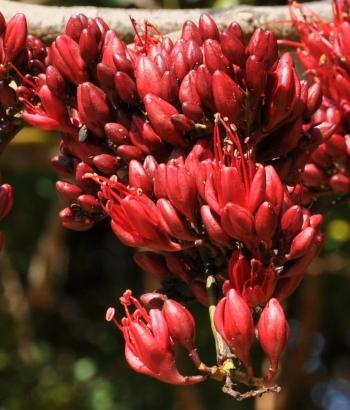 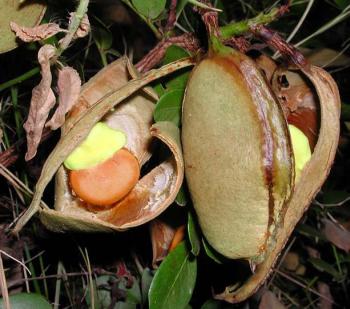 According to the Red List of South African plants, Schotia brachypetala is not threatened, and is assessed as Least Concern (LC).

Schotia brachypetala occurs in warm dry areas in bushveld, deciduous woodland and scrub forest most often on the banks of rivers and streams or on old termite mounds at lower altitudes from around Umtata in the Eastern Cape, through KwaZulu-Natal, Swaziland, Mpumalanga, Northern Province and into Mozambique and Zimbabwe. 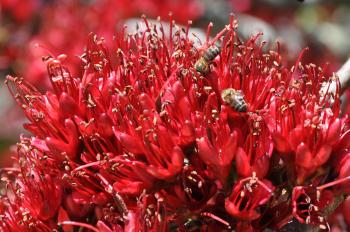 The genus Schotia was named by Nikolaus Joseph Jacquin (1727-1817) after Richard van der Schot (1733-1790). Van der Schot was originally from Delft, Holland, and was head gardener at the Schonbrunn Imperial Garden in Vienna, Austria. He went to Vienna in 1753 to tend the new Dutch Garden at Schonbrunn Palace created by Emperor Franz 1 Stephan in 1753. In 1754 he travelled with Jacquin to the West Indies on a plant collecting expedition sponsored by the Empress Maria Theresa and Franz 1 Stephan, returning to Vienna in 1756. He was the Director of the Menagerie at Schonbrunn Palace, today the Schonbrunn Zoo, from 1789-1790. Jacquin was a botanist and chemist, and studied medicine. He was Professor of Botany and Chemistry and Director of the Botanical Garden of the University of Vienna 1768-1797.

The specific name brachypetala means ‘having short petals’ in Greek and refers to the flowers which are unique among Schotia species in that the petals are partly or completely reduced to linear filaments. The beauty of the flowers is in the brightly coloured calyces (sepals), stamens and pedicels (flower stalks). The flowers produce copious amounts of nectar, which over-flows and drips or ‘weeps’ from the flowers and may be the origin of the common name, the weeping boer-bean, or huilboerboon in Afrikaans. The name could also be derived from the spittle bug, Ptyelus grossus, a small insect that parasitises Schotia brachypetala, sucking up the sap which it then excretes as froth that collect and drips down the branches, but as it also parasitises other trees, the dripping nectar is the more likely, and attractive, origin. The boerboon / boer-bean (farm bean) part of the name was earned by all the species of Schotia, because of their edible seeds, and their resemblance to the original boerboon, Vicia faba, the domestic broadbean.

Schotia is a small genus endemic to southern Africa which proved itself difficult to classify, as the members are variable and hybridise with each other where their ranges overlap. A revision of the genus undertaken by Dr. L.E. Codd in 1956 reduced the 15 described species to four. All four species are restricted to Africa south of the Zambezi River. The other three species are as follows:

Schotia brachypetala attracts a wide variety of birds, animals and insects and is a noisy, hive of activity while in flower. Nectar-feeding birds, particularly sunbirds, bees and insects feed on the nectar. Insect-eating birds feed on the insects attracted by the flowers. Starlings, monkeys and baboons eat the flowers, monkeys eat the seeds, birds eat the aril on the seeds and the leaves are browsed by game and black rhino also eat the bark. The latter visitors of course are only expected in game reserves. 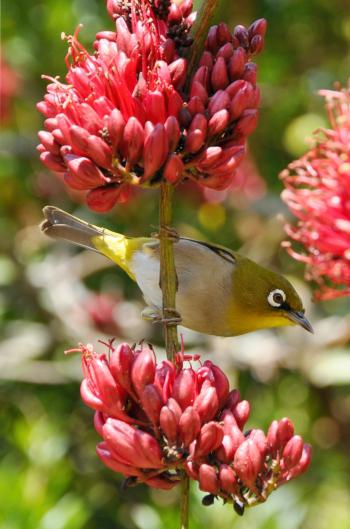 Not only is Schotia brachypetala an exceptional ornamental tree, it also has a number of other uses: A decoction of the bark is taken to treat heartburn and hangovers. Bark and root mixtures are used to strengthen the body and purify the blood, to treat nervous heart conditions and diarrhoea, as well as for facial saunas. The seeds are edible after roasting, and although low in fat and protein they have a high carbohydrate content. Both the Bantu-speaking people and the early European settlers and farmers are said to have roasted the mature pods and eaten the seeds, a practice which they learned from the Khoikhoi. The bark can be used for dyeing, giving a red-brownor red colour. The timber is of good quality, suitable for furniture making. The sapwood is pinkish-grey and not durable unless treated.The heartwood is a dark walnut, almost black, hard, fairly heavy and termite resistant with a dense fine texture and has been much used for furniture and flooring blocks. It is also said to be excellent for all kinds of wagon wood and was chiefly in demand for wagon beams.

Schotia brachypetala grows easily, transplants well and blooms whilst still relatively young. On heavy soils in colder climates it can be quite slow, but in warm, frost-free areas in deep sandy soil with plenty of water in summer, it is surprisingly fast, and has been known to reach a height of 12 m in 17 years. For best results, plant in a warm sunny position, in deep, well-aerated sandy soil, add plenty of well-decomposed compost (humus) and water liberally in summer. A general purpose granular fertiliser can be used during the growing season. It is half-hardy to frost, and young plants require protection, but a well-established tree in a protected spot, should be able to withstand a winter minimum of down to -5C (23F).

Propagation is by seed or truncheon cuttings. Schotia brachypetala grows easily from seed, which should be sown in spring to early summer, in a well-drained general-purpose potting soil, placed in a warm but shaded spot and kept moist. Soaking the seed overnight in warm (not hot) water is not necessary for germination to occur, but should hurry things along. Dusting the seed prior to sowing, or drenching after sowing, with a fungicide that combats pre-emergence damping off, although not essential, will increase the percentage germination. Truncheon cuttings can be taken in winter to early spring while the tree is not in active growth, and should placed in well-drained sandy soil in a cool shady spot and kept damp but not wet.

Schotia brachypetala with its decorative foliage, showy flowers and symmetric shapely habit is an excellent tree for gardens and parks, but it is not advisable to plant it over paved areas, car parks etc, because of the dripping nectar in the spring. It nevertheless makes a good shade tree and although it looks good in a large landscape or standing alone as a specimen tree, it is also suitable for smaller gardens.